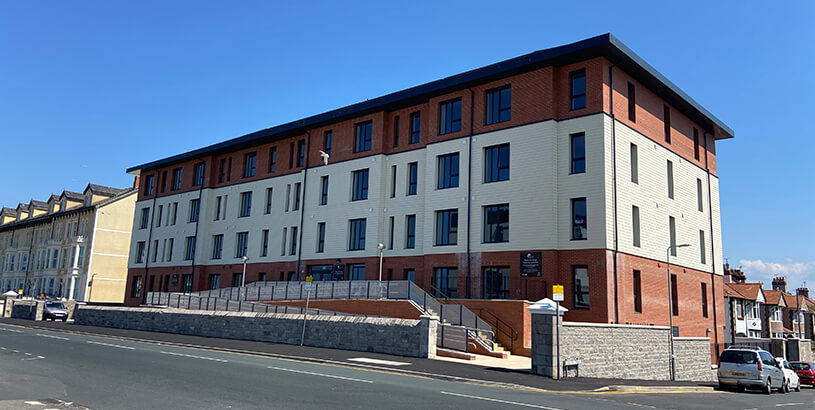 Anwyl Partnerships has handed over an over 55’s housing project that has transformed the site of the former Grange Hotel in Rhyl, creating 41 new homes.

Residents have already started moving into the highly anticipated scheme which was delivered for Wales & West Housing under a £5.1 million contract.

The former Grange Hotel had been destroyed by fire over a decade ago, with the site eventually cleared in 2017, having been condemned and left abandoned for a number of years since the damage occurred.

Located in a central position on Rhyl’s East Parade, the four-storey single-block scheme is made up of 41 one and two-bedroom apartments for older people, including several specially-adapted accessible apartments, providing much needed housing for this specific demographic.

“It’s great to see this important project handed over. Not only are we creating much needed, quality homes in Rhyl but we have also played an important role in the ongoing regeneration of the town.

“The prominent location of the site has meant that the former Grange Hotel had become a real eyesore and was being targeted by anti-social behaviour.

“The development is now complete and residents are already beginning to make the apartments their homes. We anticipate that this investment will help further stimulate the transformation of Rhyl and increase the area’s desirability and attractiveness for residents and visitors alike.”

“We’re proud to see the first residents move into the Grange, such a well known site in the Rhyl area which has been regenerated into much needed affordable homes in Denbighshire. The new apartments will be warm, energy-efficient and are situated in an excellent location on Rhyl’s seafront.

“The Grange is one of a number of our new developments in North Wales, part of our ambitious development programme to deliver hundreds of new homes in Wales each year which will help to address the national shortage of affordable housing.”